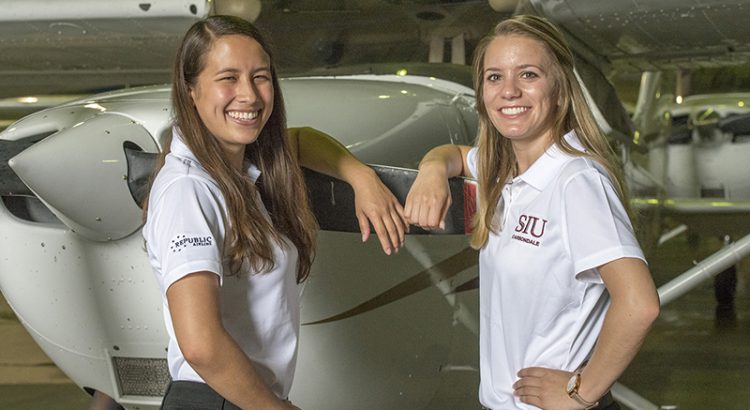 Photo above – Gabrielle Escudero, left, and Rachel Piacentini, are preparing for the 42nnd annual Air Race Classic transcontinental aviation race next month. Escudero is a senior in SIU Carbondale’s aviation management and flight program; Piacentini is a certified flight instructor with the program and 2017 graduate. (Photo by Russell Bailey)

Competing in the 2018 Air Race Classic will hold a special meaning to Rachel Piacentini and Gabrielle Escudero, who will represent Southern Illinois University Carbondale in the annual transcontinental aviation race next month. “It’s such an honor to fly with such driven, intelligent and competent women who are there to further aviation, women in aviation and minorities in aviation,” said Escudero, a senior in aviation management and flight from Aurora.

Piacentini and Escudero will be among 54 other teams competing in the 42nd annual event that traces its roots to the 1929 Women’s Air Derby, where famed aviator Amelia Earhart and 19 other female pilots flew from Santa Monica, California to Cleveland Ohio. The “Saluki Aces” will be among 22 teams from 18 colleges and universities competing.

Race will cover 2,656 miles across 15 states in four days

The event starts June 19 at Avenger Field in Sweetwater, Texas and end in Fryeburg, Maine on June 22. One of the intermediate stops will be at Galesburg Municipal Airport in Galesburg, Illinois.

As a handicap race, weather, pilot strategy and airplane speed are important factors as teams race against their own best time, not against one another. The team that beats its handicap by the largest margin wins. Standings are not determined until after the last team crosses the finish line. The event website will have real-time tracking of the racers’ locations.

Previous experience will help this year

Piacentini, an instructor in aviation management and flight, competed as an SIU student in 2016 with instructor Jessica Reed, where the pair finished 17th overall and eighth in the collegiate division. There is a different feeling this year, said Piacentini, who earned her bachelor’s degree in May 2017, and who is from Steger. “I think I learned my personal minimums, how to fly the airplane better and plan a little differently than we did last time,” she said. “A few little tricks of the trade.”

Tuning up for the event

Piacentini and Escudero, who have a “Saluki Aces” Facebook page, have been practicing together to learn how each other flies and how they will divide tasks. Piacentini anticipates that Escudero will fly most of the legs while she will do the “flybys,” where planes hold a certain altitude and distance from the runway. Depending on the distance of each of the nine legs and wind, each leg can last two to three hours. “I will get a lot more experience flying and apply everything I am learning; how to manage checklists and how to work with someone else whom I haven’t flow with as much,” Escudero said.

Piacentini explained that keeping up energy during the flights is important. “We are going to get to know each other pretty well,” she said. “It’s a serious race and you have to keep yourself on your toes but you have to have some fun with it.”

SIU entries in the race

This is the fifth year SIU will have a team in the field. In 2015, Reed and Jessica Armstrong won both the overall and collegiate title. The university pays fuel costs but Piacentini and Escudero are responsible for lodging and meals. In addition to selling T-shirts, the team received sponsorship funds from Republic Airline Inc., an Indianapolis-based regional airline.

SIU and the airline entered into an “aviation interview partnership” last fall that allows qualifying students to receive a preferential interview with the airline and a conditional job offer after they achieve their instrument rating, if all qualifications are met. The pair will compete in a Cessna 172R Skyhawk, one of five the department bought in 2011. The plane features state-of-the-art avionics glass cockpit technology that shows primary flight, engine and sensor data.

“The Air Race Classic is important for SIU Aviation, and aviation in general, because it promotes women in aviation,” Michael Burgener, interim chair for the Department of Aviation Management and Flight and chair of the Department of Aviation Technologies. “Aviation is a non-traditional field for women and anything we can do to promote and support our excellent female pilots is good for SIU Aviation.”

Various recent media reports indicate that about 6 percent of commercial and non-commercial pilots in the United States are women. However, at SIU, the number of female students in the aviation program is at about 10 percent, Burgener said. Aviation market projections from Boeing also show a strong need for pilots through 2036. “That SIU is letting us do it is not only a good way to get our name out there but to show our support for women in aviation,” Piacentini said. “It’s awesome to go out and see all these other women aviators who … are driven to get aviation out to the local communities.”

Escudero is president of the university’s Women in Aviation student chapter, and historian and past president of Alpha Eta Rho, both registered student organizations.

Escudero, the daughter of Clym and Jodi Escudero, said her aviation interest was sparked when her dad took her aboard a discovery flight when she was about 15 years old. “We flew through the clouds and I really wanted to stick my head out of the window,” she recalled. “I got so airsick that flight, but I loved it so much.”

Piacentini, the daughter of Jim and Patti Piacentini, took her first commercial flight while on vacation when she was about four years old. She later played on her dad’s Microsoft flight simulator and did the tutorials. She was also attracted by the atmosphere that generally comes with aviation and airports – “everyone is going somewhere and everyone is happy to be there usually.”