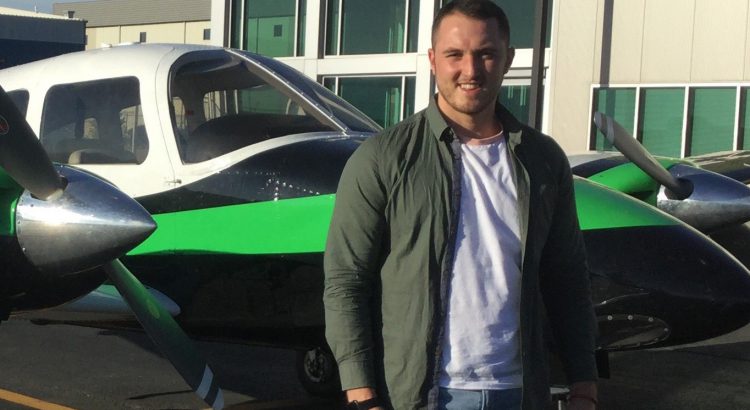 NBAA Charities and Conklin & de Decker annually award $5,000 to a carefully selected undergraduate student who is enrolled in an aviation management program at an NBAA or University Aviation Association member school. Bennett is a senior at Utah Valley University, where he is majoring in aviation science and expects to graduate in May 2020.

Bennett’s dream to become an aviator began as a child but thoughts of flying faded and were replaced with the possibility of a career path as a doctor. After spending two years living in Eastern Europe and working as a missionary, Bennett returned stateside with a renewed interest in aviation. Upon his return, he started working as a flight attendant, then obtained his associates degree and started flight school. He is now a gate agent with an airline and has a renewed dream to fly for a company in business aviation. Bennett holds a private pilot license with an instrument rating and looks forward to flying business owners and their employees around the world to help them grow their business.

“Every year, this scholarship enables us to invest in the next generation of business aviation professionals and we are very happy to be recognizing Connyr in 2019. He is a determined student and very deserving of this award,” stated Bill de Decker, co-founder of Conklin & de Decker. “On behalf of the Conklin & de Decker and JSSI family, we congratulate Connyr and wish him all the best as he pursues a career in the business aviation industry.”

The scholarship was initially created to honor the memory of Al Conklin, a U.S. Air Force veteran and business aviation leader for more than 60 years. Conklin’s career took him to business aviation where he sold aircraft for several companies and, in partnership with Bill de Decker, created the first Aircraft Cost Evaluator program and founded Conklin & de Decker. In 2015, the annual scholarship was renamed to also recognize Bill de Decker and his contributions to business aviation, for which he was honored with NBAA’s John P. “Jack” Doswell Award in 2014.