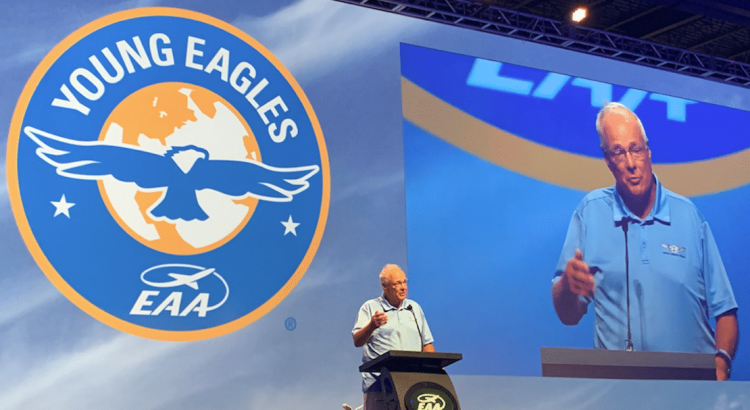 It’s true. Bob Epting, recipient of the 2019 Phillips 66® Aviation Experimental Aircraft Association (EAA) Young Eagles Leadership Award, has provided a lot of kids their first airplane ride; In fact, through EAA’s Young Eagles program, he’s made 3,150 flights – nothing to sneeze at. Yet, if you talk to Bob, it goes well beyond just giving a child their first airplane ride.

Epting says it’s the magic that happens when a kid comes to the airport, whether from the hospital or elsewhere, they’re all thinking they’re going to look at airplanes, and maybe even go up in one. “Then we go flying,” said Epting, “It’s then that a child’s perspective, their appreciation of the magnitude of the world, of the greater horizons and broader opportunities, all spread out in front of them.”

Many of the children he’s flown are burn victims from local hospitals. The experience of flying with Epting opens their imagination to what’s possible in their lives. “Doctors tell us that burns are psychologically painful as well as physically,” said Epting. “The question, ‘what am I going to do now’, echoes through their mind and that impacts their ability to heal.”

Doctors suggest that finding such a place – as the cockpit – is a place where hope exists. Once in the air, Epting explains the basic controls, and then encourages the kids to fly the plane themselves, using the metaphor that as they take control and fly his plane, they can take charge of their treatment and overcome their injuries. “What seemed like an insurmountable task, is suddenly achievable with a little extra confidence and faith.”

Epting cites one example that he will never forget; one that has framed what he does and why he does it, precisely. Epting describes the sequence – “After some encouragement, she actually takes the controls and guides the plane through the sky. She didn’t know she could do it; she did not know she would do it, but by golly, she tried, and she has done it!” Epting says her new appreciation of the possibilities of life and the opportunities open to her, give rise inevitably to hope – that is an essential component of all healing.

Epting says he has been privileged to see it over and over again. “They jump out of the plane and yell to their mom or dad or other loved one – I flew the plane, I flew the plane.” He remembers one particular time when a mom says with part disbelief and part fear, “You did not. You cannot fly a plane.” And then the magic moment comes, and she says, “Yes I did!  Yes I can!” Epting says their life is changed from that moment on, by that realization, by that hope, by that magic. “It’s the courage of truth.”

“Every one of the kids that has flown with me has left the airport thinking they can do something they never thought they’d do,” said Epting. “That’s incredibly important. It is in the belief that you can heal and live a normal life again, and I have had the privilege to experience that now thousands of times.”

Looking back, Epting knew he wanted to be a pilot as early as 4 years old. He earned his pilot license in 1983, and since then, has logged 4,500 hours of flight, all in Piper Cubs, Piper Arrows, and RV-6 and RV-7 aircraft. He travels around the southeast for his work as an environmental lawyer and, of course, for fun. He especially enjoys turning kids into new pilots.

Epting is a member of EAA Chapter 1114 in Apex, North Carolina. “Over the years Bob has made some important contributions to our chapter and sport aviation in general,” said Kent Misegades, member and former President of the Chapter. “He advised the chapter on legal issues, pro bono and ran the pancake breakfasts for many years, a key reason for the chapter’s early growth.”

Current Chapter president, Steele Scott said Epting is a champion for the Chapter and the Young Eagle program. “Bob mentored me when I first arrived in 2010 and led me towards becoming the Breakfast Chairman. Over the past nine years, as an attorney, he has created exceptional and innovative legal approaches to the risks presented by General Aviation.”

Epting shares his love of aviation with his twin brother, Jim, a retired lieutenant colonel and former executive officer of the U.S. Air Force Thunderbirds. “My brother and I don’t come from a family of aviators, but I’ve always had an instinct for sticks and rudders – even before I knew what they were,” said Epting. An attorney by trade, Epting has also made a name for himself in the aviation world. In fact, he’s no stranger to receiving awards at Oshkosh. Epting received the Gold Lindy in 2015 for his restored 1946 Piper J3C-65, and in 2001, he received the EAA Young Eagles Humanitarian award.

The award he received this year at Oshkosh recognizes outstanding Young Eagles volunteers that have supported the future of aviation by going above and beyond the basic Young Eagles flight. Epting said he was truly honored to receive the award from EAA and Phillips 66 this year. “Every one of the kids I’ve flown is special to me.”

For more than 25 years, Phillips 66 Aviation has sponsored The EAA Young Eagles, an organization whose sole mission is to introduce and inspire kids in the world of aviation by providing youths ages 8 – 17 their first free ride in an airplane. More than 2 million children have flown through the EAA Young Eagles program with the help of EAA’s network of volunteer pilots and ground volunteers.

During the awards banquet at AirVenture, Epting shared his story noting the changes he’s experienced in the life of the kids he’s flown. He received a standing ovation. “Afterwards hundreds of folks crowded around to share similar experiences,” reflects Epting. “YES I DID. YES I CAN – Maybe this ought to be our bumper sticker!” For Bob Epting, this sums it up – “I may be the luckiest man alive.”