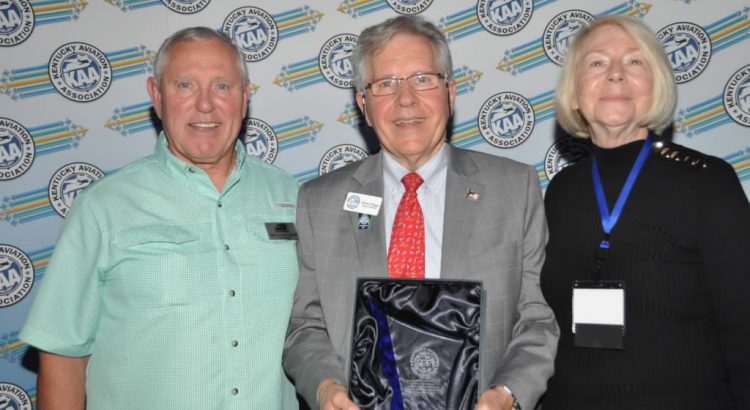 The Kentucky Aviation Association (KAA) presented its Excellence in Aviation Award to Mr. Robert G. Riggs at the 42nd Annual Kentucky Aviation Conference held in Lexington on September 26 through 28, 2018. The Excellence in Aviation Award is KAA’s most prestigious award and recognizes a lifetime of achievement in aviation. The award also honors the lifetime achievements of Henry Ogrodzinski, who was a strong supporter of the nation’s aviation system and was a special friend to aviation in Kentucky.

“Robert Riggs has demonstrated outstanding, exemplary leadership in advancing aviation in the Commonwealth,” said Maj. Gen. Jerry D. Humble, (ret.), KAA President.  Since the very beginning of KAA over 40 years ago, Robert has worked tirelessly to promulgate the value of general aviation to Kentucky’s economy and quality of life.  As the Chair of KAA’s Legislative Committee, he led KAA’s efforts to educate Kentucky’s state and national leaders on the importance of general aviation airports and the need to retain the safe and efficient movement of general aviation aircraft operations throughout the nation’s airspace.

Riggs originated the idea for hosting an annual Aviation and Aerospace Day at the Capitol and continues to lead this effort for KAA in association with the Kentucky Aerospace Industry Consortium, and is respected as a voice for aviation in Kentucky. He is steadfast in promoting aviation and aerospace education in our secondary schools, is very active in the Aviation Museum of Kentucky, and currently serves on the Kentucky Airport Zoning Commission.

Henry Ogrodzinski, known to friends and associates as Henry O, was an advocate for aviation his entire professional life.  He was a past President and CEO of the National Association of State Aviation Officials, served on the Board of Directors of the National Aeronautic Association, the Oversight Committee of the Airport Cooperative Research Program, and the Board of Nominations of the National Aviation Hall of Fame.  Riggs was a close friend of Henry O and truly exemplifies the outstanding leadership qualities recognized by this award’s namesake.

KAA is a non-profit corporation and its purpose is to foster and promote aviation facilities, safety, industry, business, recreation, and aerospace education in the Commonwealth.  KAA promotes discussion of aviation issues and opportunities through their conferences and membership interaction. KAA is strongly committed to the development of its membership, the Commonwealth’s airports and the continued betterment of aviation.