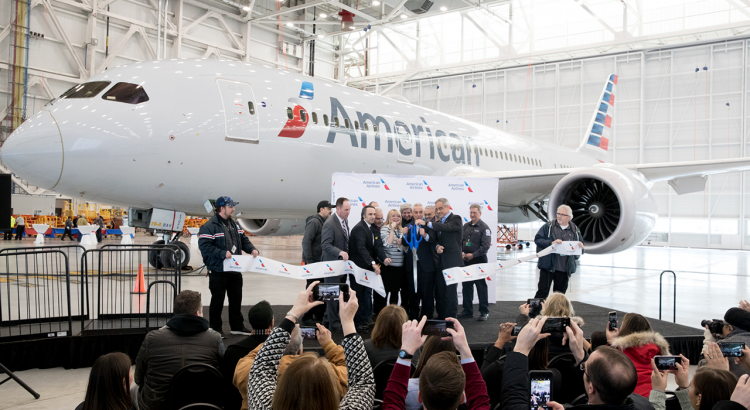 American Airlines celebrated the opening of a new hangar at its hub at Chicago O’Hare International Airport (ORD). Chicago Mayor Rahm Emanuel and a U.S. congressional delegation from Illinois joined David Seymour, Senior Vice President of Integrated Operations; Franco Tedeschi, Vice President of ORD Hub Operations; Jamie Rhee, Commissioner of the Chicago Department of Aviation; and ORD team members for a ribbon-cutting ceremony to mark the opening of the new hangar to be used by American’s aviation maintenance technicians. The new facility, dubbed Hangar 2, is the largest hangar on the airfield at ORD, and its completion marks the carrier’s latest milestone reached in a series of major investments in Chicago.

“Our team of highly skilled aviation maintenance technicians works behind the scenes day and night to ensure that our aircraft are safe for our customers and team members,” said Seymour. “The new hangar is a welcome investment in our Maintenance team and a win for our customers, who will benefit from improved operational performance as a result of quicker maintenance.”

The $215 million investment in the new hangar and ground equipment building is the latest example in a long list of investments in ORD, including: American’s five new gates known as the L-Stinger, representing the first new gates at the airport in 25 years; a new Flagship Lounge; renovated Admirals Club lounges; and an expanding list of new destinations added to the ORD route network. These improvements set the framework for American to continue to grow its operation in Chicago and throughout the network.

“Today marks a watershed moment for O’Hare as we open the airport’s first new hangar in 30 years,” said Mayor Emanuel. “American Airlines recognizes the value of this investment, and I look forward to working with all of our airline partners as we continue transforming O’Hare and upholding Chicago’s status as a leading global gateway.”

The 191,000-square-foot structure, which is replacing a smaller hangar on the airfield, has increased bay capacity. The hangar is able to accommodate six narrowbody aircraft or two narrowbody aircraft and two widebody aircraft, including the Boeing 787, on which American operates international flights at ORD. The expanded space has allowed for more overnight workload capacity in the past month that it’s been open. Its high-tech features and updated workcenters provide more than 850 ORD maintenance team members with the most current tools to maintain the airline’s state-of-the-art aircraft.

“We are pleased to join our partners at American Airlines in celebrating O’Hare’s first new hangar building in over 30 years, and yet another step forward in our efforts to modernize operations at O’Hare,” said Rhee. “American’s new hangar follows a series of investments to expand service in Chicago, supporting O’Hare’s leading global connectivity. Through our continued collaboration with all airline partners, we will deliver modern new runways and facilities to improve service for travelers while powering more economic opportunity for our city.”

“Chicago residents and visitors alike are fortunate to have one of the best airports in the world in O’Hare, and the opening of its largest aircraft hangar helps strengthen that status,” added Rep. Mike Quigley. “I applaud American Airlines for their commitment to operational advancements, which will improve safety and efficiency for passengers and better support the dedicated employees who make these trips possible.”

The new hangar facility makes way for the completion of new Runway 9C/27C at O’Hare, estimated for completion in 2020. The new runway is one of many capital improvements underway to complete the airfield modernization, which also sets stage for the forthcoming $8.5 billion terminal expansion at O’Hare. Additionally, American opened a new ground equipment maintenance building at ORD this month, where vehicles and equipment used on the airfield — like aircraft tugs, deicing trucks and baggage carts — are maintained.

“American Airlines has a long history in Illinois, and I am happy to see the company continue to invest in O’Hare,” said Sen. Dick Durbin. “This new hangar facility will improve safety and efficiency for workers and help ensure that O’Hare remains a modern and dynamic transportation center.”

“Investments like this new maintenance hangar are critical to making air travel safer and more reliable for the traveling public while creating jobs for hardworking Chicagoans,” added Sen. Tammy Duckworth. “I look forward to continuing to work with public and private stakeholders to improve O’Hare Airport for the benefit of the Illinois’ economy.”

“The opening of this new hangar is a very important step forward to continue upgrading O’Hare International Airport,” added Rep. Jesus “Chuy” Garcia. “The investment American Airlines is making will help ensure the safety of passengers, crew members and the ground team. As a member of the Transportation and Infrastructure Committee in the U.S. Congress, I look forward to working to continue modernizing and rebuilding our aviation infrastructure across the nation, and in particular, in Chicago.”

“We are now offering customers more seats in and out of Chicago than at any time in the last 10 years,” said Tedeschi. “With the new hangar, we have the space and tools to better serve our customers and our 9,300 team members based at ORD. We look forward to working with our partners at the City of Chicago and reaching more milestones as Chicago’s carrier of choice.”

The only hub carrier at ORD offering service on the Boeing 787, American will fly up to 13 787s out of ORD on peak days next summer. In the last five years since American Airlines merged with US Airways to create the largest airline in the world, the carrier has added 28 new routes serving Chicago. Additionally, American expanded its Shuttle product to fly between New York LaGuardia (LGA) and ORD earlier this year, offering business travelers a more convenient commute between the two business centers.

American supports a variety of community and civic programs in the Chicago area that are important to the city and its ORD-based team members, including the Rebuild Foundation, Goodman Theatre and the Chicago Botanic Garden. Team members support these programs through Do Crew, the airline’s team member volunteer program. Additionally, American is the official airline of the Chicago Cubs.