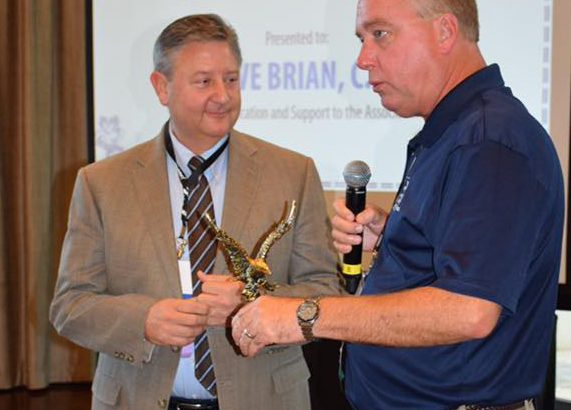 Steve Brian, Manager of the State Aviation Program for the Georgia Department of Transportation, was presented the President’s Award Last week during the Georgia Airports Association (GAA) Annual Conference and Exposition held at the Jekyll Island Convention Center.

The President’s Award is presented annually at the conference and is awarded solely at the discretion of the President.  “I chose Steve because more than anyone this past year, he helped me shape my presidency,” said Kevin Britton, Vidalia Regional Airport Manager and President of the Georgia Airports Association.

Brian is a Past President of the GAA and has spent many years as an airport director in Georgia. “It was a great honor and surprise to receive the President’s Award from the Georgia Airports Association,” said Brian. “I have been a part of this organization for more than 20 years as an Airport Director and now as the manger for the state aviation program. The Association does great work advocating for the airports in our state. I’m happy to provide my contribution and appreciate the recognition with this award.”

“With his vast knowledge from both the sponsor side and current GDOT work, Steve provided me with valuable insight,” said Britton. “He was accessible, honest and thoughtful in his advice.  Steve is a good administrator and a better friend.  The President’s Award was the best way I could think of to say, thank you.”