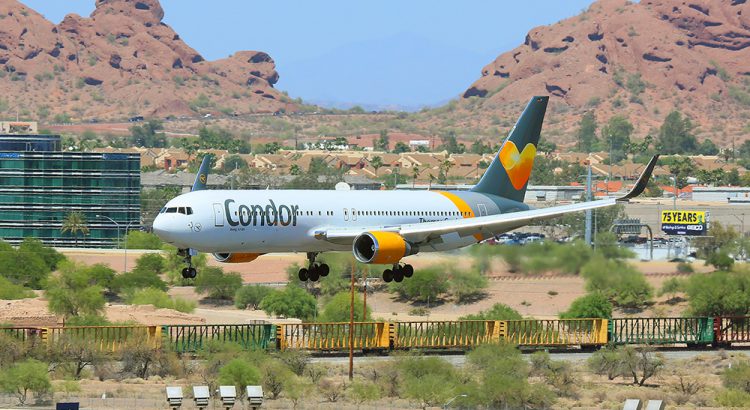 Condor, Germany’s leading leisure airline, who has been serving the North American market since the 1970’s with seasonal summer service has announced that for the first time that they will begin flights in the spring with their first non-stop flight, three times a week from Phoenix to Frankfurt on April 4th followed by non-stop flights five times a week from Portland to Frankfurt on April 10th .

This will be followed by Vancouver service, which begins on April 30th with non-stop flights to Frankfurt, five times a week. This marks the first time Condor has started their seasonal service this early in the year.

In May service will commence from an additional 10 North American gateways to Frankfurt including Calgary, Halifax, Toronto, Whitehorse (Alaska), Anchorage, Baltimore, Fairbanks, Minneapolis, New Orleans, and Pittsburgh. This is in addition to year-round flights from Las Vegas and Seattle to Frankfurt. From its Frankfurt Hub Condor offers connecting service to more than 100 destinations throughout Europe via Condor and a network of airline and rail partners.

In May Condor will also reinstate Seattle-Munich service, which is in addition to year-round flights from Seattle to Frankfurt. All flights to and from Frankfurt and Munich are operated on Boeing 767-300 equipment.

In June Condor will begin flying twice-weekly, non-stop from Frankfurt to Edmonton in Canada for the first time. During June Condor will also return to Halifax with service to Munich in addition to its Frankfurt route from this city.

“We are pleased to begin our seasonal service in North America earlier this year than ever before. This is a true testament to how more and more American and Canadian guests have discovered our award-winning service and low fares and are looking to book our flights not only for their summer holidays, but also for spring trips as well. With our low fares to Frankfurt, Munich and beyond, travelers can now take advantage of cooler temperatures and less crowds at popular European attractions during the months of April and early May,” said Ralf Teckentrup, CEO of Condor.

The entire seasonal flight schedule can be viewed online at: https://www.condor.com/de/generated/flugplan_S2020.pdf.