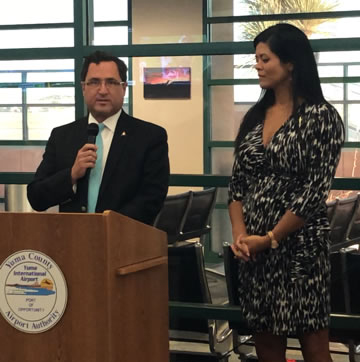 AQST Space Systems Group, LLC has announced the relocation of their facilities to Arizona with headquarters in Mesa and secured manufacturing in Yuma.

Arizona’s statewide network of defense industry assets attracts the aerospace industry with its compatible needs for resources and capabilities. AQST provides strategic planning to the space and defense industry in the areas of satellites, space systems, artificial intelligence and robotics. AQST, in looking to relocate from Puerto Rico to Arizona, reviewed the full assets of the entire State of Arizona, from Mesa to Flagstaff to Yuma.

In June, AQST opened their Mesa headquarters citing their confidence in the local higher education system. Then in August, AQST found their secured manufacturing site at the Yuma County Airport Authority’s Defense Contractor Complex. Arnaldo Soto, Jr., the Chairman and CEO stated, “The AQST Team visited Yuma in early August to meet with Yuma’s leadership, military representatives, higher education, economic development and airport officials. The Team was very pleased to learn about Yuma’s friendly business environment, turn-key facilities and infrastructure and the support available at the airport, with veteran transition program for employment and opportunities to develop degrees programs in support of our operations.”

AQST is taking advantage of the existing Joe Foss Hangar in the Defense Contractor Complex (DCC) created by the Yuma International Airport. The airport currently provides facility support to NASA’s CPAS Team testing the parachutes for the Orion Space Program at the U.S. Army Yuma Proving Ground (YPG). YPG, while providing 70 years of testing services for the military, also provides custom testing for other agencies, governments and private companies developing defense and space-related technologies like the re-entry capabilities of the Orion Capsule. AQST is following in NASA’s footprints at the DCC.

Airport Director Gladys Brown shared, “The airport built the Defense Contractor Complex to encourage businesses such as AQST to come to Yuma and take advantage of the resources available within this region of the state.”

The Arizona-wide focus of meeting all the needs of the defense and space industry brings the various communities across the state into a complementary network. Mesa Mayor John Giles expressed this focus as, “This is the way Arizona does business. Building upon each community’s strengths across the state makes Arizona an intensely strong competitor for any high-tech company like AQST.”

AQST signed a 10-year lease at the DCC’s Joe Foss Hangar and is projected to begin operations at the end of 2018. “We are excited to have AQST here in Yuma while working with our partners in Mesa. This is a recipe of success for AQST as well as the whole state,” affirmed Mayor Douglas Nicholls, City of Yuma.