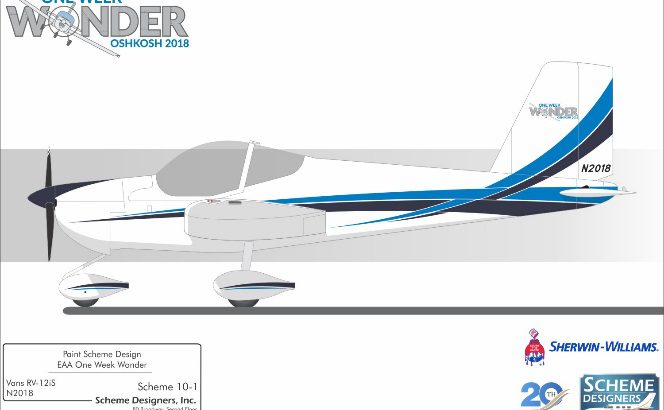 The results are in: after thousands of people made their choice, Sherwin-Williams Aerospace and the Experimental Aircraft Association (EAA) have unveiled the winner of the Pick the Paint Poll for EAA’s One Week Wonder.

The One Week Wonder project allowed EAA staff and experienced volunteers to show how people can build their own aircraft. The aircraft was built during the week of AirVenture, being completed on July 29 and flown for the first time on July 30.

One of the interactive components of this year’s One Week Wonder was Sherwin-Williams Aerospace’s Pick the Paint Poll made in collaboration with Scheme Designers, Inc.

The interactive experience allowed visitors and volunteers to decide what the Vans RV 12iS would look like after its one week completion. In all, more than 3,000 aviation enthusiasts cast their votes online prior to AirVenture and in-person at the show for their preference of color schemes. Out of the three paint schemes, the winning design gathered 41 percent of votes cast.

Additional donations from sponsors include an aircraft engine from Rotax and avionics from Garmin. Additionally, SteinAir, Inc. provided the avionics panel and Aircraft Spruce sponsored the pins given out to those who pulled a rivet as part of the project.

The aircraft was completed and had its first flight on Monday afternoon. Rose Aircraft Services, Inc. General Aviation Solutions is scheduled to paint the aircraft mid-September.