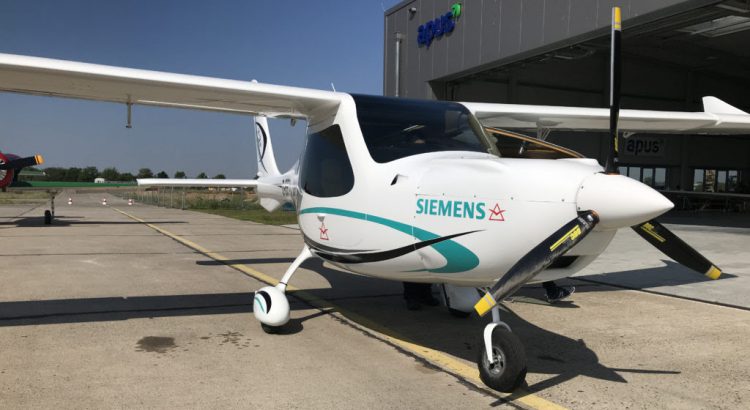 Flight Design reported that the first public flight of the Flight Design F2e took place at the Strausberg airfield, near Strausberg, Germany on June 5, 2019. The aircraft is based on the newly developed F2 from Flight Design with an integrated safety cell and is equipped with an innovative electric propulsion system.

Flight Design created the F2e with partners Siemens eAircraft, the manufacturer and developer of the propulsion technology and APUS, a Strausberg-based company specializing in the development and integration of sustainable propulsion systems in aviation.

The project serves to gain knowledge on environmentally friendly flight with innovative propulsion concepts and on the safe integration of energy storage systems within the airframe. It represents the basis for further Flight Design development and certification of a practical electric aircraft. The F2e is based on standard components that are used in the Rotax 912iS powered F2 variant.

The Flight Design F2 is a high-wing strutless design which is largely manufactured using carbon fiber composite technology. The company is a market leader with 2000 aircraft delivered and flying all over the world. The company‘s focus is on Europe and the Americas with Asian markets managed through cooperation with local partners.

Flight Training is one area that generates the best opportunity for improvment in the environment for nature, nearby residents and airfields as noise emissions are concentrated in that one place, the airfield, where future pilots spend a lot of time flying.

The propulsion system provided by Siemens eAircraft includes the 55 kW electric direct drive SP55D, an inverter and the modular control system EPUIII consisting of the Vehicle Control Unit, Cockpit Control Unit, Battery System Master and Power Supply Unit. The propulsion system has already been extensively tested in laboratory and ground tests as well as flight tested for hundreds of flight hours under the supervision of Siemens eAircraft.

The expectations were fulfilled with the successful first flight. Energy consumption for take-off and cruise was within the expected range, and the temperatures in the system were more positive than expected.

Flight Design, Siemens and APUS are working with international authorities to simplify the certification of electric aircraft of this class. These include the development of regulations for propulsion and energy storage.

Flight Design, manufacturer of the CT the world’s most popular Light-Sport Aircraft (LSA) and the new F2 LSA and F4 certified aircraft is proud to announce a new distribution agreement with Ameravia Inc. of Miami Florida.

“We are very pleased to be working with Ameravia, which includes a group of aviation professionals from the Miami area,” said Tom Peghiny, President of Flight Design USA. “They possess a great depth of knowledge of flight training, aircraft fleet sales and marketing, aircraft maintenance and service and international aviation regulations.”

Located at the Miami Executive, Tamiami, airport, Ameravia has been in business for more than 10 years and will manage Florida, Southern Georgia, Alabama, Mississippi, the U.S. Virgin Islands in the Continental United States, all Central America and all South America except Brazil.

“We have been associated with Flight Design since we started our aviation businesses said Chris Benaiges, CEO of Ameravia. We have expanded our business with the addition of the distribution of Vulcanair Aircraft in the U.S. and desired to rejoin Flight Design general aviation and their new ownership as the timing seem great for both enterprises. We are looking forward to the new F2 and the four seat F4,” said Benaiges.

Ameravia has created a new Aero Club featuring only affordable new and late model aircraft initially based at the Miami Executive airport. The Ameravia Aero Club is currently offering a new CTLSi and a new Vulcanair V1 for their members and is planning to expand to other locations.

The Aero Club was the dream of Ameravia’s Vice President of Sales & Marketing Mike McMann, a veteran of the general aviation business. “We are very excited to be a regional distributor for Flight Design and we think the F2 will be the perfect plane for our individual owner, fleet sales and Aero Club customers,” said Mike. “I’ve known the folks at Flight Design USA for nearly 15 years and we are looking forward to helping expand their business both here in the South East USA and South America as well.”