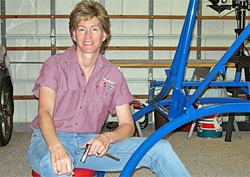 Lisa Turner of Hayesville, North Carolina, is the 2015 recipient of the EAA Tony Bingelis Award. The award recognizes her 10 years as an EAA technical counselor, promoter of builder education through EAA chapters, and author of numerous articles on flight building and safety in such publications as EAA Sport Aviation, The Experimenter, KITPLANES Magazine, The Safety Wire, and local chapter newsletters.

Turner (EAA 509911) has been heavily involved with EAA and is passionate about spreading awareness of flying and building safety for aircraft builders. She has been involved with various member projects as a technical counselor and flight advisor.

“Lisa’s contagious passion for reaching the dream of building or restoring an aircraft rubs off on everyone around her,” wrote Justin Griffin, the EAA member who nominated Turner. “The excitement is easy to enjoy, and has propelled many people to believe they can reach their dream of building and flying their own airplane, beginning the journey by joining the EAA.”

Lisa will receive the award at the Homebuilder’s Dinner on Thursday evening, July 23, 2015 during EAA AirVenture Oshkosh 2015.

The Tony Bingelis Award recognizes EAA technical counselors for dedicated service and/or significant contributions in assisting members to build and restore aircraft. Recipients of the Tony Bingelis Award are chosen by a committee of their peers as outstanding examples of people whose contributions have positively affected members’ aircraft building or restoration projects. Honorees are commemorated in a permanent display at the EAA AirVenture Museum in Oshkosh, Wisconsin.