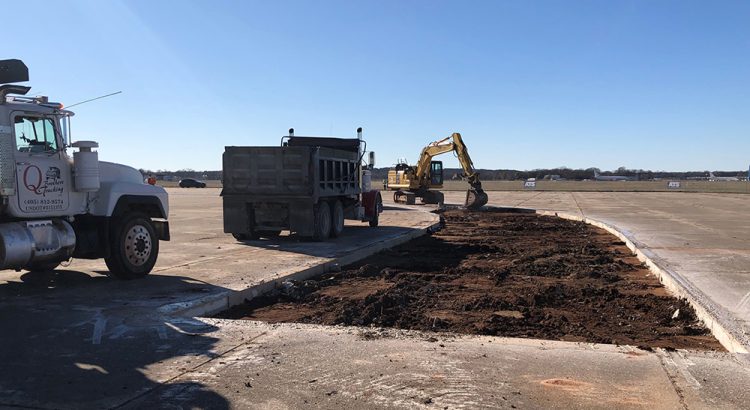 Citadel Construction is ready to move tons of earth for Aircraft Towing Systems World Wide (ATS) and build the prototype for the company’s test site at the Ardmore Industrial Airpark in Ardmore, Oklahoma.

“The underground channel system will also be covered with specialized steel plates,” Shoemaker said. “We’re installing part of the world’s next great innovation for the airports of the future with the ATS electrically powered tug system. Move over Elon Musk, ATS is getting ready to make waves!”

ATS will use an electric-powered underground “pull car” and above-ground “tow dolly” that will run along the U-shaped channel to move aircraft to and from airport runways and gates without using the aircraft’s main jet engines.

“It is exciting to have a contract with Citadel Construction and their subcontractors because we are finally able to dig in the dirt to create the ATS underground channel,” ATS Vice President/CEO Vince Howie said. “Once complete and weather-permitting, our unique ATS channel will be used to test our aircraft towing system prototype this summer.”

ATS is the longtime dream of successful Polish businessman and entrepreneur, Stan Malicki, who is the ATS president. Howie said Malicki developed the ATS concept after learning a pilot friend was frustrated due to lengthy taxi times at airports and the subsequent needless burning of tons of aviation fuel.

“Fortunately, Oklahoma’s strong aerospace background and pro-aviation business environment was attractive to Stan when deciding where and when to incorporate ATS in 2016,” Howie said. “We worked together with the Oklahoma State University New Product Development Center (OSU NPDC) in Stillwater, Oklahoma, to design and develop our ATS system prototype. We have also brought in a host of experts to help create different parts of the system.

“After landing an aircraft, the pilot will taxi to the appropriate taxiway and drive the aircraft nose wheel onto the ATS ‘tow dolly’ where it is secured in place. Pilots can then shut off the aircraft’s main engines.” According to Howie, the real beauty of ATS is lower-fuel costs, on-ground safety improvements (including fewer on-ground aircraft collisions) and the significant decrease of harmful emissions and noise pollution.

“Airlines and airports will benefit with increased operational capacity and prolonged engine and component life,” Howie said. Progress continues with the prototype’s “pull car” and “tow dolly,” including its hydraulic plumbing, wiring and software coding. “We believe ATS will revolutionize the way airports operate around the world and will change the world one airport at a time,” Howie said.