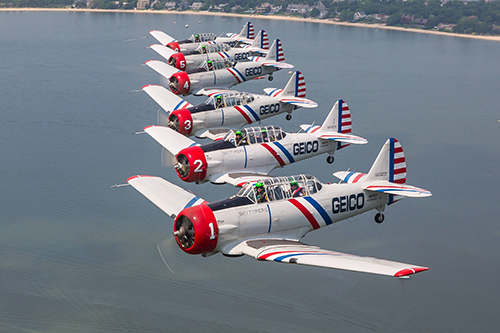 The GEICO Skytypers team opens its 2016 performance schedule March 19-20 at the Tampa Bay AirFest hosted by MacDill Air Force Base.

The world-famous GEICO Skytypers aircraft will roar over air show crowds in six vintage SNJ trainers, the Navy’s variant of the single-engine plane that trained pilots of the “Greatest Generation”. The pilots demonstrate the combat tactics and maneuvers that helped control the skies during World War II and the Korean Conflict.

“Most of our team earned their wings in the military and we always pay tribute to the brave pilots of the ‘Greatest Generation’ as well as those currently serving in the Armed Forces,” says GEICO Skytypers Commanding Officer Larry Arken, who also is the team’s flight leader. “It is a special privilege to fly these vintage WWII trainers on behalf of GEICO.”

Two of the Skytypers pilots have connections to MacDill and the Bay area.

Air Force veteran Steve Salmirs, now a commercial airline pilot, began his military service when first assigned to MacDill AFB. Salmirs is the lead solo pilot for the Skytypers and is instrumental in developing, writing and instructing the team’s 18-minute, close-formation precision-flying demonstration.

Bob Johansen, FAA Master Pilot and slot pilot for the Skytypers, is a retired Navy aviator who resides in nearby Tierra Verde, FL.

The GEICO Skytypers are based in Farmindale, NY, where the 75-year-old planes are maintained by a full-time staff of expert mechanics who travel with the pilots to every air show.

In addition to their precision, low-level air show demonstrations, the SNJ’s are retrofitted to type giant messages in the sky. Flying wingtip-to-wingtip in a line-abreast formation, the lead plane sends computer signals to each of four other aircraft and synchronizing smoke releases to generate 1,000-foot-high messages. Each letter is taller than the Empire State Building.

“People on the ground can see our messages from 15 miles away,” says Steve Kapur, the GEICO Skytypers marketing officer. “The messages appear in dot-matrix style, but on a monumental scale and 17 times faster than traditional skywriting.”

Tampa Bay AirFest will take place on March 19 and 20 at MacDill Air Force base. The event is free and open to the public with gates opening each day at 8 a.m. The USAF Thunderbirds will headline the show on Saturday and Sunday in addition to other military and world-class civilian act demonstrations by the USSOCOM Paracomandos, Red Tail Squadron, Rob Holland, Michael Goulian, Jim Tobul and local resident Jerry “Jive” Kerby flying his T-28 and RV-8 “Wild Blue.”

In addition to skytyping, airshow performances and races, the Skytypers are actively involved with children’s charities and youth organizations. The team has historically conducted presentations at youth centers, schools, hospitals, boys and girls clubs, community groups, ROTC programs, and veterans’ facilities. Many of these events have been hosted planeside with the team of pilots.