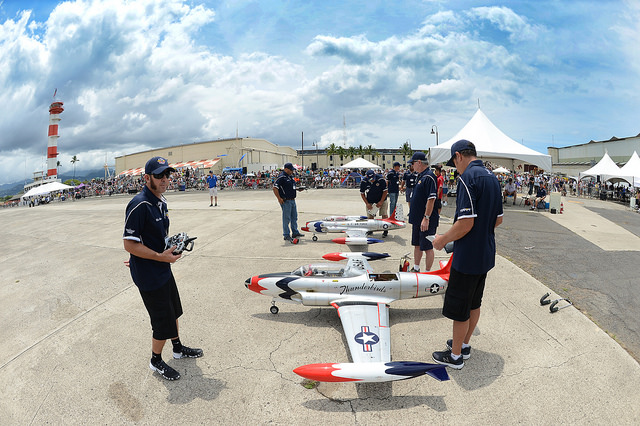 Pacific Aviation Museum Pearl Harbor’s popular remote control Biggest Little Airshow in Hawaii is back for its tenth year, Saturday and Sunday, June 3 and 4, 10am to 4pm. Guests will be able to drive on to Ford Island for this event, or take the free shuttle from the Pearl Harbor Visitor Center. Parking is free. A family favorite, the Airshow features local and nationally acclaimed remote control pilots and their award winning Giant Scale aircraft.  Other attractions include open cockpits, hangar tours, restored World War II aircraft displays, and the return of “Snow Fields in June” for kids.

For two days, Ford Island will come alive with remote-control flying, static aircraft and full-size aircraft on display, “candy bombings” over historic Ford Island Runway for kids, hands-on modeling stations, a Kids Zone with rides, food, drinks, retail, music, entertainment, and other activities. Hangar 79 will be open, providing access to see the Museum’s many aircraft exhibits, plus the B-17E Swamp Ghost and Nakajima Kate, in restoration.

This year, the Airshow welcomes back Warbirds West, a nationally acclaimed award winning team of pilots flying giant-scale remote controlled aircraft. This year’s airshow will pay tribute to the 75th anniversary of the Battle of Midway, a 1942 four-day, sea-and-air battle that was the decisive turning point of World War II in the Pacific. Performances include innovative aircraft showcasing action packed in-air stunts, demonstrations and dogfights, and a tribute to the role of aviation in the defense of our nation’s freedom. On the ground, spectators will be able to explore static aircraft displays and interact with pilots and crew members.

Visitors can also enjoy free tours of Hangar 79 and climb into the open cockpits of some of the Museum’s classic aircraft. Hangar 79 still bears the bullet holes of the December 7, 1941 attack on Pearl Harbor. Inside, guests will see helicopters, fighter planes, and Lt. Ted Shealy’s Restoration Shop, the 1941 machine shop that is busy restoring the Museum’s aircraft. They’ll also get up close and personal with an F-14 Tomcat, F-15 Eagle, F-86s, P- 40, MiG-15, F-111, and the one and only “Swamp Ghost,” the Museum’s B-17E Flying Fortress.

Sponsors, exhibitors and vendors are invited to participate. For more information including sponsorship and booth opportunities, call 808-441-1013 or 808-445-9069.

Admission to the Airshow is $5 per person (including entry to Hangar 79). It’s free with Museum general admission and free to Museum Members. Tickets for the Airshow only and tickets for the entire Museum (2 hangars and 50+ aircraft) are available online at www.PacificAviationMuseum.org. Museum admissions may also be purchased at the Museum ticketing desk and at the Pearl Harbor Visitor Center ticketing desk. Shuttles depart every 15 minutes, 7:30am to 5:00pm from Pearl Harbor Visitor Center, round trip to the Museum. Call 808/441-1007 for more event information or visit www.PacificAviationMuseum.org, Facebook, Flickr, Instagram, and @PacificAviation on Twitter, for updates.

Pacific Aviation Museum Pearl Harbor is located on Historic Ford Island where bombs fell during the attack on Pearl Harbor, December 7, 1941. Located at 319 Lexington Boulevard, Historic Ford Island, Honolulu, Hawaii it is a 501(c)(3) non-profit organization that depends on membership, volunteers, and donations for support. To join, volunteer or support, visit www.PacificAviationMuseum.org.