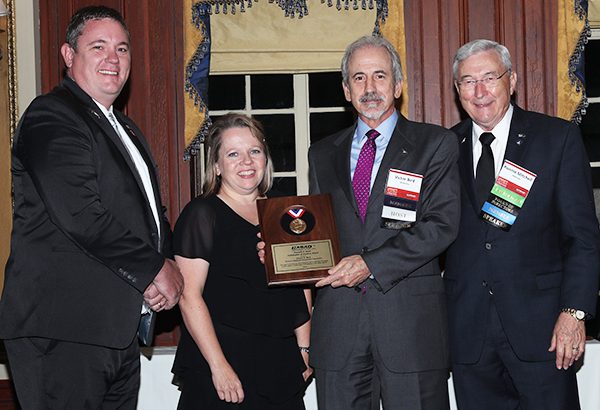 At its recently concluded 87th annual convention and trade show in Oklahoma City, the National Association of State Aviation Officials (NASAO), presented its most prestigious award, the Kenneth Rowe Ambassador of Aviation Award, to Victor Bird, Director of the Oklahoma Aeronautics Commission.

“It was an honor to be the host state for our annual convention. To be able to showcase what is our state’s second largest industry, aviation and aerospace, to my colleagues from around the country, officials from the Federal Aviation Administration, and other industry representatives was itself a privilege and honor. To be recognized by your peers with this award is most humbling. It is truly an award to my staff who are the capabilities of the Aeronautics Commission,” said Bird, the Director of the Oklahoma Aeronautics Commission.

“No one has worked harder than Vic to ensure the viability of our aviation and aerospace industry. Aviation and aerospace is our second largest industry with an annual economic impact of $44 billion, an $11.7 billion payroll for 206,000 jobs, and an average salary of $73,300. I congratulate Vic for his efforts and leadership on behalf of the industry and upon his receipt of this well-deserved award,” said Governor Mary Fallin.

Bird championed legislation in 2005 that repealed the sales tax on all maintenance, repair and overhaul of aircraft (MRO). This resulted in Oklahoma companies engaged in MRO, which is a large part of the aerospace industry in Oklahoma, having a competitive advantage. In 2008, he advocated for the Aerospace Industry Workforce Bill, legislation providing tax credits to the engineers that go to work in aerospace, and the aerospace employers that hire them. The legislation has significantly contributed to thousands of engineers going to work in aerospace and companies like Boeing and Northrop Grumman locating hundreds of engineering jobs in their Oklahoma operations. In 2010, Bird shepherded the Aircraft Pilot & Passenger Protection Act, legislation protecting public-use and military airports from encroaching incompatible development.

Senator Jim Inhofe said, “Vic has been a tireless advocate for aviation and aerospace in Oklahoma and around the country and has worked to advance policies that have led to the growth of the aerospace industry in Oklahoma. His leadership has ensured a system of airports that serves the needs of commerce and communities across the state as well as the safety of civil and military aviation in Oklahoma. This recognition from his peers is well-deserved.”

Congressman Steve Russell added, “No one has been a stronger advocate for aviation and aerospace in Oklahoma than Vic. His work and advocacy to ensure the safety of both civil and military aviation from incompatible obstructions has been admirable. I salute him on his receiving this award from NASAO.”

Bird has been the director of the Oklahoma Aeronautics Commission since 2002. In 2010, he served as chairman of NASAO, the only Oklahoma director to ever serve in that capacity. Bird has been previously honored by the aviation community. In 2009, he received the General Thomas P. Stafford Award from the Oklahoma Aerospace Alliance for his outstanding contribution to the Oklahoma aerospace industry. In 2010, he was awarded the Joseph B. “Doc” Hartranft Award by the Aircraft Owners and Pilots Association (AOPA). The Hartranft Award is annually presented to an elected or appointed federal, state, local, or foreign government official who has made significant contributions to the advancement of general aviation. Bird is the first and only non-elected recipient of the Hartrfanft Award. In 2017, Bird received the Chairman’s Award from NASAO for his dedication and unwavering support for NASAO and its membership.

“Oklahoma has never had a better advocate and promoter of aviation and aerospace than Vic Bird. He is our number one ‘Airvangelist,’ and I salute him on his receiving the NASAO Kenneth Rowe Award. He earned it,” said Lieutenant General Tom Stafford (ret.).