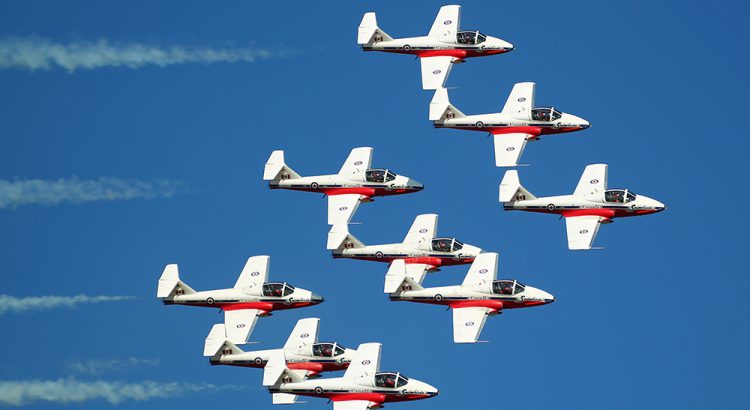 Photo above by Matt Smith.

The Canadian Forces Snowbirds, one of the most popular military aerial demonstration teams in the world, announced EAA AirVenture Oshkosh is part of its 50th year performance schedule in 2020, making Oshkosh a stop for the second time in five years. The announcement was officially made at the International Council of Air Shows (ICAS) convention in Las Vegas.

EAA AirVenture Oshkosh, the 68th annual Experimental Aircraft Association fly-in convention known as the “World’s Greatest Aviation Celebration,” is July 20-26 at Wittman Regional Airport in Oshkosh, Wisconsin. The Snowbirds are currently scheduled to have a public practice session over the grounds on Friday, July 24, with full performances during the daily afternoon air show on Saturday and Sunday, July 25-26.

The Snowbirds, officially designated as 431 Air Demonstration Squadron, were created in 1971 and have a nearly 50-year connection to EAA, as they were the first military team to perform at Oshkosh when they flew over the EAA fly-in during the 1970s. They last appeared at AirVenture in 2016, which was their first performance there since 1983.

“There is an elegance in the Snowbirds’ aerial choreography that is matched by no other military demonstration group,” said Rick Larsen, EAA’s vice president of programs, publications, and marketing, who coordinates AirVenture features and attractions. “When they appeared at Oshkosh in 2016, the Snowbirds were warmly welcomed not only for their air show performances but for the way they interacted with our attendees, including some team members even camping with their jet on the show grounds. The Snowbirds’ return is just one more reason that EAA AirVenture 2020 will be an event to remember.”

The Snowbirds fly Canadair CT-114 Tutor jets in approximately 60 air shows each year. The nine aircraft used in the performances are piloted by experienced team members from the Royal Canadian Air Force. During the show, the pilots fly at speeds ranging from 110 to 465 mph (180 to 750 km/h) and in formation with distances as close as four feet of wing overlap. Comprised of exciting loops, rolls and solo passes as well as graceful nine-jet formations, the Snowbirds’ show includes more than 50 different formations and maneuvers over each 35-minute performance.